“I want to see no Red Cross, no Caritas, no World Council of Churches, no Pope, no missionary, no UN delegation. I want to prevent even one Ibo from having even one piece to eat before their capitulation. We shoot at everything that moves and when our troops march into the centre of Ibo territory, we shoot at everything, even things that do not move” (Benjamin Adekunle, Commander, 3rd Marine Commander Division, Nigerian Army to French Radio Reporter).

See also….IPOB declares May 30 as sit-at-home day throughout Biafraland and Nigeria in remembrance of its fallen heroes and heroines 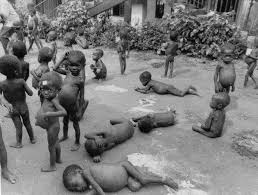 “All is fair in war, and starvation is one of the weapons of war. I don’t see why we should feed our enemies fat in order for them to fight harder”, (Chief Obafemi Awolowo, Nigerian Minister of Finance, July 28, 1969)

“Until now efforts to relieve the Biafran people have been thwarted by the desire of the central government to pursue total and unconditional victory and by the fear of the Ibo people that surrender means wholesale atrocities and genocide. But genocide is what is taking place right now and starvation is the grim reaper. This is not the time to stand on ceremony, or go through channels or to observe diplomatic niceties. The destruction of an entire people is immoral objective, even in the most moral of wars. It can never be condoned”, (Richard Nixon, during the presidential campaign, September 9, 1968)

“Its (mass starvation) is a legitimate aspect of war (Anthony Enahoro, Nigerian Commissioner for Information at a press conference in New York, July 1968)

“Starvation is a weapon of war, and we have every intention of using it against the rebels” (Mr Alison Ayida, Head of Nigerian delegation, Niamey Peace talks, July 1968.)

“The Igbos must be considerably reduced in number”, Lagos Policeman quoted in New York Review 21 December, 1967)

“One word now describes the policy of the Nigerian military government towards secessionist Biafra: genocide. It is ugly and extreme but it is the only word which fits Nigeria’s decision to stop international Red Cross and other relief agencies from flying food to Biafra ( Washington Post editorial, July 2, 1969).

“In some areas in the East, Igbos were killed by local people with at least the acquiescence of the Federal forces, 1000 Igbo civilians perished in Benin in this way” (Max Edward Reporter, reporter on the ground – New York Review, 21 December 1967).

“After federal forces take over Benin, troops killed about 500 Igbo civilians after a house to house search with the aid of willing locals” (Washington Morning Post, 27 September, 1967)

“The greatest single massacre occurred in the Igbo town of Asaba where 700 Igbo male were lined up and shot as terrified women/children were forced to watch” (London Observer, 21 January,1968)

“There has been genocide on the occasion of the 1966 massacres, the region between the towns of Benin and Asaba where only widows and orphans remain, federal troops having, for unknown reasons, massacred all the men” (Paris Le Monde, 5th April, 1968)

“Bestialities and indignities of all kinds were visited on the Biafrans in 1966. In Ikeja Barracks (Western Nigeria) Biafrans were forcibly fed on a mixture of human urine and faeces. In Northern Nigeria numerous housewives and nursing mothers were violated before their husbands and children. Young girls were abducted from their homes, walking places and schools and forced into intercourse with sick, demented and leprous men” (Mr Eric Spiff, German War Correspondent, eyewitness, 1967)

“650 refugee camps, contained about 700,000 haggard bundles of human flotsam waiting hopelessly for a meal, outside the camps, was the reminder of an estimated four and half to five million displaced Kwashiokor scourge, a million and half children, suffer(ed) from it during January; that put the forecast death toll at another 300,000 children. More than the pogroms of 1966, more than the war casualties, than the terror bombings, it was the experience of watching helplessly their children waste away and die that gave birth to, a deep and unrelenting loathing. It is a feeling that will one day reap bitter harvest unless” (Frederick Forsyth, British Writer at Umuahia, January 21st 1969)

“The loss of life from starvation continues at more than 10,000 persons per day over 1,000,000 lives in recent months. Without emergency measures now, the number will climb to 25,000 per day, within a month and 2,000,000 deaths by the end of the year. The new year will only bring greater disaster to people caught in the passion of fratricidal war, we cant allow this to continue or those responsible to go free” (Senator Kennedy appeals to Americans, Sunday November 17, 1968)

“Myself and the same UNICEF representatives went on to convey something of what lay behind this intransigence: Among the large majority hailing from that tribe who are the most vocal in inciting the complete extermination of the Igbos. I often heard remarks that all Nigeria’s ills will be cured once the Igbos have been exterminated from the human map.” (Dr Conor Cruise O’Bien, 21 December, 1967, New York Review

3 thoughts on “IN BIAFRA | The Loss Of Life From Starvation Continues At More Than 10,000 Persons Per Day, Biafra Heroes Day Remembrance.”