The Ondo State Government in its reaction to the viral photos of armed members of the Miyetti Allah Cattle Breeders Association of Nigeria setting up a vigilante group in Akoko area of the state, stated that it won’t tolerate such.

Recall that the General Secretary of Forward Buhari, Dr. Kayode Ajulo, said in an interview with Channels TV on Monday, that he encountered the armed herdsmen with their cattle while travelling to Ondo State with armed policemen on Sunday. He further alleged that the identity card carrying men, said the vigilante group was set up with the permission of the Nigeria Police Force.

However the Ondo State Government in a statement released by its Commissioner for Information and Orientation, Donald Ojogo, said they are not aware of any such identity card carrying persons in the name of a vigilante group. Security agencies have also been directed to get to the root of the matter, and apprehend any such person or group of persons operating in that manner.

“It is pertinent to recall that at the height of the incessant kidnap cases, the Ondo State Government took some far-reaching drastic measure.

“This included a marching order to the law abiding Hausa Fulani leadership in the area to fish out criminal elements among them who took advantage of the rosy relationship between the indigenes and their law-abiding guests.

“As a measure to curb and possibly, stamp out cases of kidnap in the area, the Hausa Fulani leadership was directed to select a handful of trusted men amongst them who could serve as tour guards in the thick forest as security agencies prepared to comb the forests. This measure yielded results.

“It is important to note however, that while Government appreciates the efforts of those who volunteered to provide information and served as tour guards to the security agencies in the ongoing operations in the area, it will not tolerate any unathorised move by any group to take an undue advantage of the current state of insecurity in the country.

“Succinctly, Government, having been unaware of any such identity card carrying persons in the name of a vigilante group, has directed security agencies to get to the root of the matter and apprehend any such person or group of persons operating in that manner,” the statement stressed. 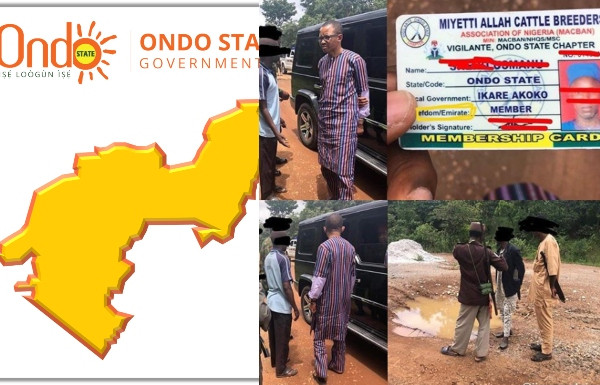