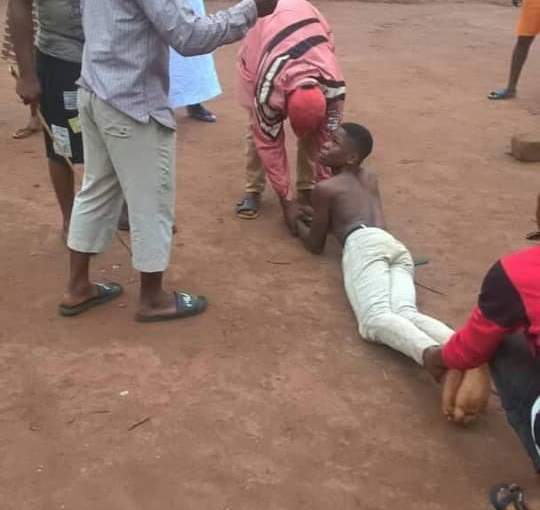 The man in a blue T-shirt is Sunday Matias Ekeogu from Umunwachukwu village in Oboro-Umueze Community in Ogwa town in Mbaitoli Local Government Area of Imo State. The young man that is unclad is his son by name Chimereuche Ekeogu while the young pregnant girl is his daughter from a different woman.

Though Mr. Sunday never married any of these children’s mothers,he is a super single father(SSF). The saddest and abominable story is that Mr. Sunday alongside his son Chimereuche has been sleeping with his own daughter/ sister to an extent that they got her pregnant.It got to the ear of the chairperson of the youth forum of the said village. After thorough investigations by the youths, men, women and children of the village, they decided to banish the three of them from the land.

Information gathered reveals that the same man, Mr. Sunday Matias Ekeogu, had once impregnated his two nieces from his two different sisters.

16 years back Mr. Sunday impregnated his niece and she delivered a baby girl.Now the baby has grown up,Mr Sunday started sleeping with the girl.She’s five months pregnant.