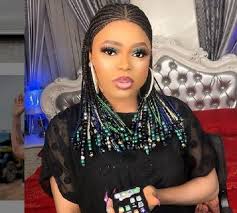 A renown Lagos socialite,S.A Miller, owner of Millers Synergy, has announced in a video that he will gun down Bobrisky and James Brown anytime their paths cross.

‘It is better they arrest me now.. the day I will see Bobrisky or James Brown I will gun them down I swear by my late papa’s grave..’ .

According to him it is wrong for young men to shake their booties and behave like women. And that Bobrisky and James Brown who he referred to as ‘gays’ ought to be arrested….