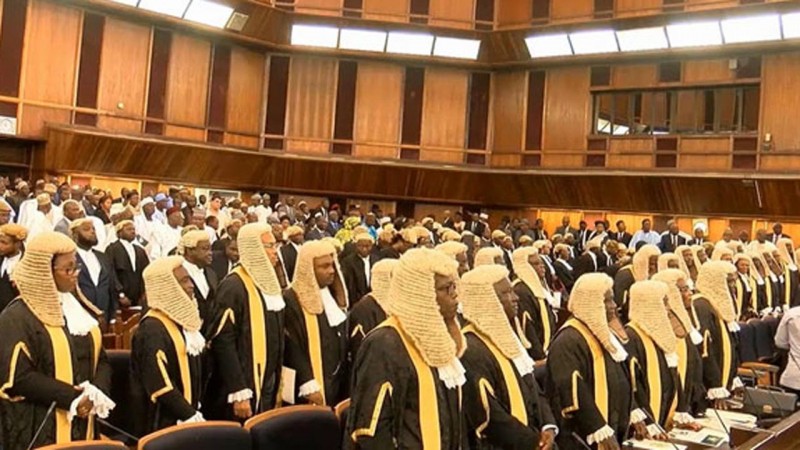 The National Judicial Council (NJC) has suspended indefinitely the interview for judicial officers into the bench of the Supreme Court.

The Council’s Committee on Interview for Appointment of Judicial Officers into the Supreme Courts of Records was to have conduct the said interview on Tuesday, September 24.

Although no reason was adduced for the suspension, it may not be unconnected to the exclusive report by Daily Sun on the subject matter in its August 23 Monday edition.

Daily Sun had exclusively reported that the Court of Appeal is embroiled in crisis as a result of scheming over who replaces Justice Zainab Bulkachuwa as president of the court. She is to retire in the next coming months.

The crisis is occasioned by an attempt to stop the next most senior Justice of the Court, Justice Monica Dongban-Mensem from becoming the next President of the Court of Appeal (PCA), in favour of Justice Muhammad Garba.

Her name has been sent to the National Judicial Council (NJC) for promotion to the bench of the Supreme Court.

She was expected to appear for an interview on Tuesday at the NJC alongside Justice Muhammad Garba, whose name is also on the list.

Daily Sun however learnt that the decision to promote her to the Supreme Court is ill-intended as it is laced with ethnic, political and religious colouration.

Besides, according to sources, the inclusion of Justice Garba’s name for the interview is a mere gimmick as the main target for the job is Justice Dongban- Mensem, a Christian from Plateau State, who is currently the presiding Justice of the Court of Appeal, Enugu division.

According to a document by the National Judicial Council (NJC), Committee on Interview for Appointment of Judicial Officers into the Supreme Courts of Records, dated September 17, Justice Dongban-Mensem and Justice Garba were among the six candidates that made the list, while six others made the reserve list.

Daily Sun was told that Justice Dongban- Mensem was stopped from becoming a Justice of the Supreme Court many years ago by some forces within the judiciary.

Justice Muhammad Garba was Chairman of the five member presidential election petition tribunal that dismissed the petition filed by the Peoples Democratic Party (PDP) and its candidate, Alhaji Atiku Abubakar, against the re-election of President Muhammadu Buhari.

Daily Sun learnt that the clandestine plot to scheme out Justice Dongban-Mensem from becoming the next President of the Court at the Court of Appeal by some forces, became glaring after the President of the court, Justice Zainab Bulkachuwa withdrew from the presidential panel as its chairman.