A tragic incident occurred on Friday in Central African Republic, as three people were confirmed dead after a United Nations peacekeeping helicopter crashed on landing.

Director of Information and Public Relations of Senegal’s Armed Forces, Colonel Abdoul Ndiaye said the helicopter which crashed is a Senegalese air force Mi-35 helicopter gunship deployed to MINUSCA and it was returning from an operational mission.

Head of the MINUSCA mission, Mankeur Ndiayeh revealed that the crash which occurred as the chopper was landing in the western town of Bouar also resulted in one injury

“It is with immense sorrow that I have learned of the crash of a Senegalese combat helicopter as it was landing at Bouar, leading to three deaths and one injured,” Mankeur Ndiaye tweeted. 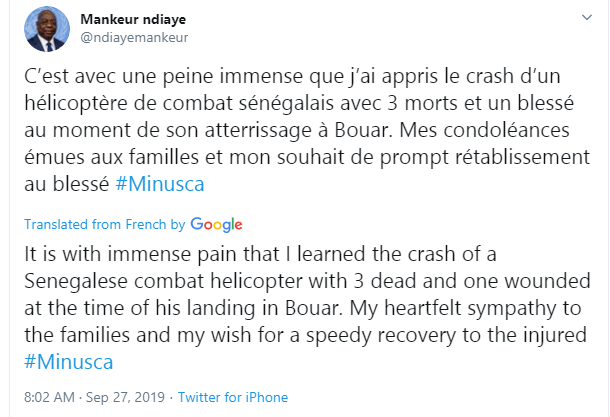 The Central African Republic has been enmeshed in a crisis after Muslim Selaka rebels overthrew President Francois Bozize in 2013. The forceful overthrow of government led to reprisals from mostly Christian militia.