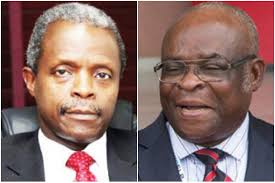 In addition to pushing for Osinbajo’s investigation by the Economic and Financial Crimes Commssion (EFCC), the forces are reportedly insisting that the vice president should account for Social Investment Programme (SIP) funds which were under his supervision before the general election.

In January, a non-governmental organisation, Anti-Corruption and Research-Based Data Initiative (ARDI) forwarded a petition to the Code of Conduct Bureaun(CCB), wherein it detailed fraud allegations against then Chief Justice of the Federation, Walter Onnoghen.

ARDI Executive Secretary, Dennis Aghanya, explained then that his petition against Onnoghen was to save Nigeria from collapse and that his organisation commenced investigation against him in 2018.

That was the plank upon which Onnoghen was arraigned before the Code of Conduct Tribunal.
On October 3, the Resource Centre for Human Rights and Civic Education (CHRICED) charted a similar path when it called on the EFCC to probe Osinbajo in an alleged N90 billion released to him by the Federal Inland Revenue Service for the elections.

In the petition, CHRICED said the allegations were quite weighty and worrisome.

The petition signed by Ibrahim M. Zikirullahi reads: “On the basis of this express declaration from the president, to the effect that public funds will not be deployed to fund electioneering purpose of the ruling party, the Nigerian people believed and trusted the president’s pledge.

“However, the claims by Timi Frank imply that the ruling party did not adhere to the directives of the president on his proclaimed non-use of public funds to prosecute the election in favour of the ruling party.

“If these allegations are proven to be true, it would also mean that the campaign finance legislation governing the electoral process, as enshrined in the Electoral Act 2010 as amended, had been flagrantly violated.

“As a former Deputy Publicity Secretary of the ruling party with the benefit of wide contacts in the seat of power, Timi Frank could as well be privy to information, which the rest of us may not know.

This step from your honourable Commission is critical, and will help clear the air, and douse the suspicion, which the allegations have precipitated since they began circulating.

“If the vice president is culpable as these allegations claim, then he should be made to face the consequences of such culpability.
“However, if the claimant making the allegations is found to be deceiving the public, appropriate steps should be taken to hold him to account; in line with the rule of law.”

It was gathered that although the vice president has “no problem with his boss,” the forces against Osinbajo are insisting that his role in the Federal Governments backed SIP must be investigated.

A source privy to the plot added: “At an interactive session with women in the Presidential Villa, early this year, it was the First Lady, Aisha Buhari, who raised the alarm that the federal government SIP was a failure in the North. The first lady even said that the SIP failed in the state of the SSA to the president, in charge of the programme. These and other allegations about SIP funds are being bandied about, against the VP.

“There is a formal petition before the EFCC. They must act on it.”

Daily Sun’s efforts, yesterday, to ascertain what EFCC is doing about the petition yielded no result.

Telephone calls and text messages to EFCC’s Head of Media and Publicity, went unanswered.
Regardless, two weeks ago, the vice president met with the Christian Association of Nigeria (CN), where he dismissed the fraud allegations as “politics of 2023.”

Daily Sun gathered that at the meeting held at Akinola Agudu House, inside the Presidential Villa, Osinbajo insisted there was “no N90 billion anywhere,” and that he is ready to defend his integrity anywhere.