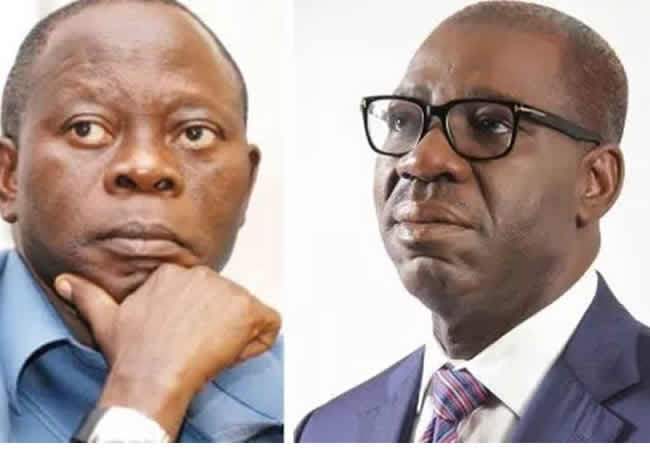 Facts emerged Tuesday on why Governor Godwin Obaseki of Edo State rejected the five-man fact-finding committee set up by the National Working Committee (NWC) of the ruling All Progressives Congress (APC) to look into the crisis rocking Edo State chapter of the party.
The committee was set up by the leadership of the party to look into the rift between the governor and his predecessor, Adams Oshiomhole, who is also the national chairman of the party.
The battle for supremacy between the two men has polarised supporters of the party in the state, a development many believe may affect the party’s chances in the governorship election taking place next year.
According to a statement issued by the party’s National Publicity Secretary, Mallam Lanre Issa-Onilu, the committee has a mandate speaking with all sides to the crisis and reporting back to the NWC.
On Monday, the party spoke of a plan to constitute a committee of prominent members to steer a process of reconciliation in the South-South state.
Issa-Onilu said in the statement: “The National Working Committee (NWC) of the All Progressives Congress (APC) has appointed the governor of Kano State, Alhaji Abdullahi Ganduje, to head the party’s five-member fact-finding committee for the APC chapter in Edo State.
“Other members of the committee are: Governor of Katsina State, Aminu Bello Masari; former governor of Oyo State, Abiola Ajimobi; former governor of Borno State and serving senator, Kashim Shettima and Honourable Ahmed Wadada (Secretary).”
However, speaking with our correspondent, an associate of Obaseki who described the committee as “kangaroo”, said they are not interested in the work of the Ganduje committee as it was set up by the APC NWC which is a one-man show under the dictate of Oshiomhole.
He said the governor is in total support of President Muhammadu Buhari’s constitution of a National Reconciliation Committee for the APC that will address grievances and conflicts amongst party members.
“The governor is not interested in the kangaroo committee set up by the NWC. Today, only Oshiomhole is taking personal decision which he will now ascribe to the NWC.
“Bolaji Abdullahi, the party’s former National Publicity Secretary alluded to that in a recent interview and other members of the NWC who have also cried out over Oshiomhole’s dictatorial tendencies have been suspended”.
Just look at the membership of the committee. They are all loyalists of the national chairman.
“So, Governor Obaseki is not interested in anything the Ganduje-committee is doing. However, he is in full support of the national reconciliation committee which President Buhari has ordered to be constituted. That supersedes any committee set up by the NWC”, he said.