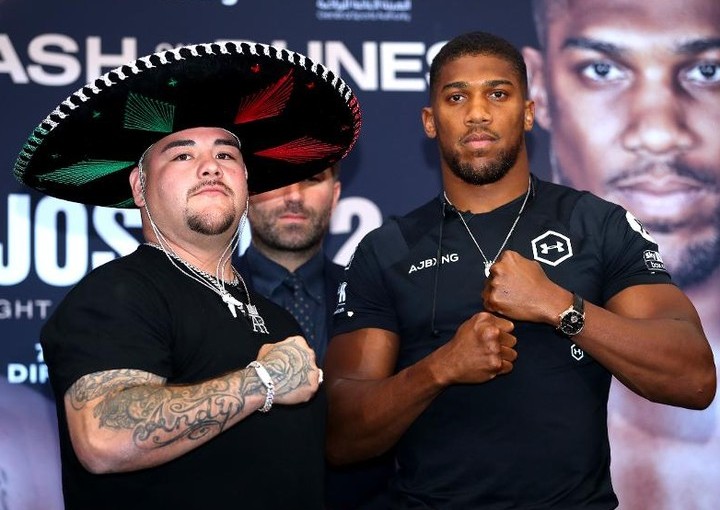 Anthony Joshua will walk away with $85million at the end of the rematch with WBA, IBF and WBO champion Andy Ruiz Jnr on Saturday, 7 December. The staggering sum will give Joshua the heftiest pay-night ever for a British boxer.

The rematch which is set for Ad Diriyah, Saudi Arabia sees Anthony Joshua aiming to reclaim the titles he lost to the Mexican-American boxer in their last outing in June at Madison Square Garden.

According to Riyadh Newsflash, Joshua will pocket $85million from the rematch, while Andy Ruiz Jnr will go home with $13million even if he wins or loses the bout. That’s $2 million more than he earned in the first meeting with Joshua.

Joshua was humiliated by four knockdowns on his way to a seventh-round KO that shocked the boxing world.

Meanwhile, Andy Ruiz Jr said Monday that all the pressure will be on dethroned champion Anthony Joshua in their contentious showdown.

The pair will fight close to the Saudi capital Riyadh, in a hotly-anticipated contest dubbed “Clash on the Dunes”.

“We’ve got to see where he’s at because all the pressure is on him. The pressure isn’t on me because I followed my dream, made my dreams come true,” Ruiz said in Riyadh.

“Of course I want more though –- I want the legacy of Andy Ruiz Jr.”

Joshua said he was “comfortable” and “very relaxed” ahead of the rematch.

“I was this close last time, so next time I won’t mess up.”