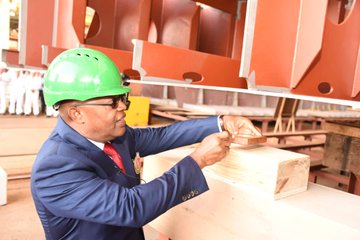 The chief of the Naval Staff, Vice Admiral Ibok-Ete Ibas, has performed the keel laying ceremony of Nigeria’s new warship in Sharjah in the United Arab Emirates. The ship will be a landing ship tank (LST) and it will replace Nigeria’s previous two landing ship tanks, NNS Ambe and NNS Ofiom, which were decommissioned 10 years ago.

The new warship is expected to be completed in May 2020

Landing ship tanks were very important in the Pacific theatre of World War 2, when Commonwealth and US forces battled the Japanese from island to island. They ferried men, vehicles and other materials from captured island to the next island battlefield.

NNS Ambe. NNS Ambe has a regular ramp at the rear of the ship (just like the World War 2 LST pictured above) and it also has an articulated ramp in front (which is why the front is higher than other parts of the ship). The ramp in front can be lowered and extended when the ship wants to offload its cargo in very shallow water. NNS Ambe played a very important role in Nigeria’s Ecomog operations in Liberia.