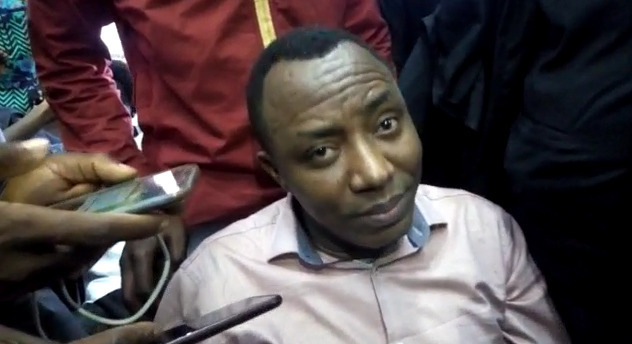 The Senate has mandated its committee on Judiciary, Human Rights and Legal Matters to investigate Friday’s invasion of a federal high court and rearrest of the publisher of Sahara Reporters, Omoyele Sowore, by operatives of the State Security Service (SSS).

This comes almost a week after the incident.

Nigerians have criticised the lawmakers for failing to react and address the issue.

The chairman of the Senate committee on Judiciary and Human Rights and Legal Matters, Opeyemi Bamidele (Ekiti Central), raised the matter during plenary on Thursday.

He came under Order 43 of the Senate Standing Rule.

Order 43 allows for a lawmaker to raise and issue but prohibits other lawmakers from making contributions or debating the said issue.

He said the “alleged” invasion of the courtroom by “alleged DSS officials”, has raised a lot of concerns in different quarters in Nigeria.

“The leaders and members of the judiciary are particularly concerned about this happening because they believe that the courtroom is meant to be a sanctuary. But for us as a Senate, we cannot begin to take a position or analyse issues based on conclusions without facts.

“Yet, much as we cannot just jump into conclusions, we cannot pretend not to know that Nigerians are concerned about this development,” he said.

Mr Bamidele said he came under Order 43 so as not to “generate any controversy or make the Senate to begin to debate an issue that we need fact and evidence about.”

He prayed that as elected representatives of the people, the Senate mandates its committee on National Security and Intelligence to interface with the relevant security agencies and investigate the matter and report back to this Senate.

The Senate President, Ahmad Lawan, simply said the matter be investigated by the Judiciary committee.

The committee is expected to report back after a week.

Already, the House of Representatives has mandated its relevant committees to investigate the actions of the SSS.

Mr Sowore was arrested alongside another activist, Olawale Bakare, on August 3 for planning a protest to call for good governance.

They were charged with treasonable felony, fraud and insulting President Muhammadu Buhari.

The court granted the duo bail twice but the SSS refused to release them until Thursday night.

However, less than 24 hours later, the SSS rearrested them within the federal high court in Abuja, sparking national outrage.

In a bid to justify the action of the SSS, the presidency said Mr Sowore’s call for revolution was aimed at overthrowing the democratically elected of Nigeria.

Many Nigerians and organisations have condemned the act and called for the sack of the Director-General of the State Security Service (SSS), Yusuf Bichi, over the illegal detention of Omoyele Sowore, and Friday’s invasion of a federal court.

The Nigerian Bar Association also called for the suspension of Mr Bichi.