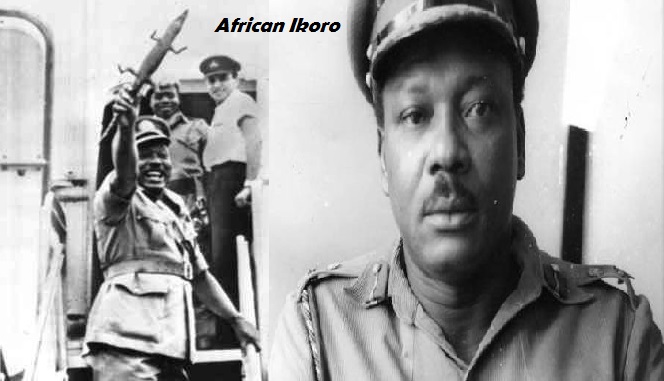 29th July 2020 is the 54th anniversary of the Theophilus Danjuma Coup that overthrew and killed Major General Thomas Umunnakwe Aguiyi Ironsi. It is also to be added that he was by a long shot, the MOST IDIOTIC Igbo man that ever lived in the 20th Century. I feel extremely bitter each time I think of his unheralded IDIOCY.

Biafra Would Sooner Or Later, With Or Without Colonel Ojukwu, Rise Up Again — Frederick Forsythe, Umuahia, 1969

Nzeogwu was persuaded to give up the headship of the military Government to semi illiterate Ironsi because of the gap between Nzeogwu and Ironsi by way of rank, besides there was a Brigadier, Colonels and Lieutenant Colonels in-between, including Oxford Educated Chukwuemeka Odumegwu Ojukwu.

But what next did he do? He surrounded himself with Hausas and Fulanis as his body guards. The head of his body guards was Lieutenant Bello, a Northerner, his Secretary was a Northerner [ka ewerekwé kpóó ya ezigbo mmadu that is NOT tribalistic].

Then came May 1966 when he promulgated the unitary decree which meant that any Nigeria could take up a job in the Civil service anywhere in Nigeria.

By then the Northerners were virtually UNEDUCATED and this was interpreted by Northerners as Igbonisation of the whole Nigeria as an educated Igbo man could then go to Sokoto, Kano, Kaduna, Zaria, Maiduguri, etc. and take up a job he had the educational qualifications to do while only very few Northerners were educated.

Ironsi was then warned by Igbo intelligentsia that what he was doing was very dangerous for the Igbos. Ironsi being the semi illiterate he was, felt he knew best [i.e. Eze Amarachaanam, Eze onye adunam. Eze Okacha mara.]

He had no education when he was enlisted into the Army, all the education he had was in the Army. Then came May 1966, the Northerners rioted, giving the unitary decree as their excuse, and killed 30,000 Easterners in various parts of Northern Nigeria and buried them in mass graves.

Again what did the GENETIC IDIOT of Ironsi do? Instead of arresting those who plotted the massacres he appointed a panel to probe the riots. Meanwhile the blood of 30,000 Igbos was NOT enough settlement of scores by the Northerners for the January, 15th, 1966, coup, they wanted the big dividend ie headship of the Federal government.

Ladies and gentlemen, to retain the uplift of the intelligence of the Igbos I can tell you that Ironsi was NOT a full blood Igbo. His mother was from Umuahia, a cousin of one of the parents of Nnamdi Kanu but his father was from Sierra Leone, that’s why Ironsi’s full name was Johnson

Again the pathological IDIOT of Aguiyi Ironsi played down reports of the coup plot. He appointed Brigadier Ogundipe to investigate the coup plot allegation, but Ogundipe reported to Ironsi that the rumours of a coup plot was a HOAX.

Each time an Igbo leader trusts a Yoruba man, it ends in tragedy. Ironsi did NOT trust any Igbo officer to investigate the coup plot, he trusted Ogundipe and it ended in disaster.

Ojukwu trusted Awolowo when they both agreed at Enugu in 1967 that if Ojukwu declared Biafra, he, Awolowo will declared the Republic of Oduduwa, but when Ojukwu eventually declared Biafra, Awolowo went on to be the minister of finance in Gowon’s Government.

Ojukwu ignored crack commanders like Colonel Achuzie and appointed Colonel Banjo to lead the western operation to capture Lagos within two months of the outbreak of the Biafran war, but on Biafran troops getting to Ore, Yoruba chiefs spoke mgbati mgbati to Colonel Banjo and he turned Saboteur.

Achuzie never ever forgave Ojukwu for the defeat of Biafra, that was why Achuzie did NOT attend Okukwu’s funeral when he died. Then what happened next?

On 29th July, 1966, Aguiyi Ironsi was holding a meeting with Lieutenant Colonel Adekunle Fajuyi, the then Military Governor of Western Nigeria, then Northern troops led by Major Danjuma who was only then recently promoted from Captain to Major by the same Aguiyi Ironsi, smashed into where Ironsi was holding a meeting with Fajuyi at the state house in Ibadan.

Just prior to that, Ironsi’s aide-de- Camp and the rest of Ironsi’s bodyguards, all of who were Northerners had bolted away. Ohaneze look at ATURU of a half Igboman called Aguiyi Ironsi rejecting fellow Igbos as his bodyguards and entrusting his safety into the hands of Hausas and Fulanis.

Danjuma then asked Fajuyi to deliver Ironsi to the Northern troops or else… by then Ironsi was hidding somewhere in the state house, but Fajuyi refused, saying that Ironsi was his guest and that he, Fajuyi,will NOT give up Ironsi.

For his refusal, Danjuma ordered his troops to arrest Fajuyi as well. A thorough search at the state house fished out Ironsi, then the following dialogue transpired between Ironsi and Danjuma:

Aguiyi: what is the problem, Major Danjuma?

Danjuma: I have come to arrest you.

Aguiyi: I am happy I am being arrested by you Northerners who I have loved more than my own brothers and for this reason I have attracted to myself the hatred of my own brothers.

Danjuma: Don’t talk nonsense…with a simultaneous deafening slap on Ironsi’s left cheek. What role did you play in the January Coup?

Aguiyi: Was Sir Abubakar not calling me his son? How could I have had hands in the January coup?

Danjuma: You killed Sir Abubakar and Ahmadu Bello, now it is your turn. Arrest him. [He issues order to his troops]

The soldiers then knocked Ironsi down and dragged both Ironsi and Fajuyi to an army Jeep and drove then to a spot 9 miles on the Ibadan Iwo Road and bundled the two men into the bush and took Ironsi to a cassava farm and shot him several times.

They said that Igbos killed Abubakar and dumped his body by a Gworo tree and that we i.e. Danjuma and his troops killed Ironsi and dumped him by a cassava tree.

Ohaneze, 200 years of Igbo progress received a 100 years set back because of the IDIOCY of Aguiyi Ironsi.

Ohaneze, those of you who have access to Mrs Victoria Aguiyi Ironsi should ask her why does she continue to keep mute each time Journalists ask her “WERE IGBOS HAPPY WITH HER HUSBAND?”

By Mazi Darlington Imoh, the Officer Without Portfolio of the Biafran Campaign.