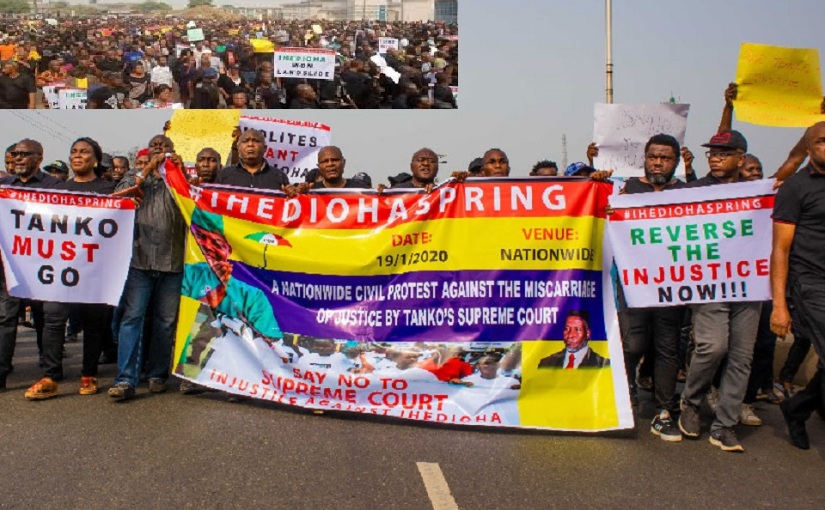 Members of the Peoples Democratic Party in their tens of thousands on Sunday protested against the sacking of Emeka Ihedioha by the Supreme Court and the declaration of Hope Uzodinma of the All Progressives Congress, as the duly elected governor of the state.

The Ekumeku Movement, The Fiercest Warriors That Fought The British For 31Years

The PDP members in Imo, Taraba, Abia and Ogun states urged the apex court to reverse itself and declare Ihedioha the winner.

Police and military authorities in the state also positioned their personnel in strategic locations to forestall  a possible breakdown of law and order.

The PDP protesters who were decked in black attires, engaged in procession round the state capital, calling on the jurists to revisit the Tuesday’s verdict which sacked Ihedioha.

They vowed that the protest would continue if the apex court refused to resolve the Imo governorship debacle in their party’s favour.

A member of the House of Representatives, Henry Nwawuba, who spoke to journalists, alleged that the Supreme Court justices had murdered democracy in the state.

He said, “I believe that the Supreme Court must redeem the judiciary. Since the judgment was delivered, the state has become a graveyard. This is unlike what happened when the PDP was holding sway.

“How the Supreme Court justices gave victory to a candidate who came fourth at the election remains a mystery to many of us. We call on them to revisit the Imo case and do justice.”

The PDP woman leader in the state, Maria Mbakwe, who betrayed emotion while speaking to journalists, said, “I have never seen this kind of injustice in the last 50 years that I have been living in Imo State.”